As a contribution for Forum for Ethics, Virtues and Uprightness, we present this paper of Paul Kingsnorth from the Abbey of Misrule

On rising above the ground 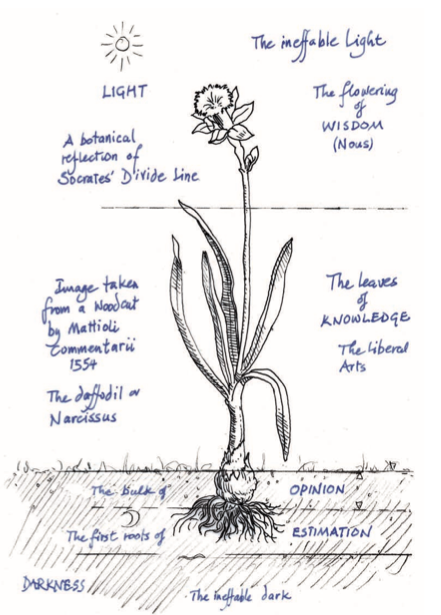 In my last essay, I wrote about the ongoing ‘culture war’ as a symptom, rather than a cause, of the cultural disintegration that I see rolling out now across the West, and especially across the Anglosphere. I wrote about Oswald Spengler’s theory of Western decline, and how his notion that we are now entering an age of ‘formlessness’ seems to me to be correct. Next week I’m going to write more about the form.

But I have a thought in the meantime about how to talk about this – or rather, about what it is that we are really talking about. As the terminology suggests, a ‘culture war’ does pretty much what it says on the tin: it’s an argument, shading increasingly into a more serious conflict, about the deep values of a culture – and even, in these confused, post-postmodern times, about what and whether a ‘culture’ even exists. But rarely does this stay on the level of cultural analysis. In the social media age, where every opinion can become a grenade in seconds, and armies can form before anyone has worked out what they’re fighting for, the whole thing has become politics. And there are big forces at play – corporations, cultural institutions, private actors, well-heeled lobby groups – turning wheels behind the scenes. This is one reason why the whole experience of even talking about it is so traumatic. It is tied up with a power struggle. Dip your toes into the water, and the chances are that some shark or other will drag you in.

But is there another way to talk about this – or another level to talk about it on? That’s what I am clumsily pursuing here, and as I thought about this question, I remembered something I had been introduced to a while back by my wife, who is an enthusiastic student of sacred geometry; the search for hidden patterns in the universe. It’s from a book by the late Keith Critchlow, one of the founders of the Temenos Academy, called The Hidden Geometry of Flowers, and you can see it at the top of this post.

This is Critchlow’s rendition of a Socratic concept apparently laid out in Plato’s Timaeus (which I am not going to pretend to have read.) Critchlow uses the image of a flower to explain the different levels of knowing we can operate at. Like a flower, our knowing – or understanding – will begin in the soil, and reach its way up towards the light. This, says Socrates and Critchlow and just about every spiritual teacher in human history, is the journey we are all on: to shift our level of understanding always upwards towards the divine light.

I like the way Critchlow does this here, because it offers us all a good aspiration. Look at where it starts, down at the roots: estimation. Trying to work things out. This is where we all start out. But immediately above this comes the bulb of opinion. This is where our culture mostly operates, and where most of us do too, most of the time (I plead guilty.) What is social media, what is the ‘public debate’, what is the ‘culture war’ but the constant manifestation of the bulb of opinion? But this is the lowest level of knowing: it is not even out of the soil. Nothing has broken through yet. There is no truth to be found here.

We need to aim higher. The leaves that grow from that bulb are fed by knowledge: real knowledge. That means reading, experience, open conversation, exploration and paying attention, especially to people we don’t like. Our insta-culture militates entirely against this. Opinion sells. Opinion generates clicks. Thoughtful exploration is not easily commercialised, and it doesn’t get the blood up either. But I think we have to spend our time here, because this is where we build up towards what any plant is working towards: flowering. This is the birth of true wisdom, the move into the ‘ineffable light’. If we are stuck in the bulb of opinion, we will get nowhere. Knowledge is necessary, but not the end goal. Wisdom – Truth – is where we must be headed.

I’m not going to suggest that you will find that here, but as we think and talk and explore, we should keep our eyes on this prize. We should keep our feet on the ground and stand that ground: say what we know to be true, and refuse to be intimidated, but remind ourselves always that ‘mere opinion’, as the poet Rumi once called it, is mired in darkness and we have to grow beyond it. The more I think about this, the more I think that ‘opinions’ are brittle. We defend them so angrily because at some level we are not sure about them at all.

It’s just a thought – and an image – that I wanted to share. To end, here is another one, taken from my favourite – and probably only – Orthodox punk ‘zine Death to the World. When you find yourself dispirited about the shattering we are all living through, you might find it helpful. For me, the perspective it provides is a pointer towards the flower:

We take it as our great privilege to enter an age wherein no stone remains on another. There is much to be gained amidst the dark ruins of a shattered word: Brokenness and desolation, so hopeless in the eyes of some, are invisibly pregnant with promise in the eyes of others. As we kick the opiate of material comforts, exit the temple of broken idols, and come to acknowledge that our culture is one of loud and benumbing noise, we finally stand on the threshold of encountering Truth. If one is not seduced back to numbness by the influence of contemporary life, this threshold positions one to apprehend truly (and even transcend almost completely) our dying world’s scaffolding – its logic, appearances, gross phenomena – and come to know by experience the spiritual, otherworldly life. Thus, when one loses all that is of apparent worth and modern society’s ugly face is unmasked, a search for the new, authentic life begins.