The Coming of Mystery Imam al-Mahdi 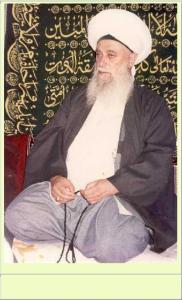 In this age of unrest and accelerating change, modern social and political pundits have been left behind by the rapid pace of events. A new world order is on the cards, all agree. But war clouds loom over the horizon in the current Mideast and modern textbooks offer little solace to the common man, let alone to world leaders in a period of deepening crisis.

In such a time as this, thoughtful men and women pray for a godsend, the clear voice of inspired guidance and direction. With the whole world now inching to the brink of fully modern war and masses of people clamoring for one thing and another thing, today it is welcome for sages and saints to return to public life after many long years of obscurity.

His Holiness Sheikh Nazim Adil Al-Haqqani, world leader of the Naqshbandhia Order, is respected as a servant of Allah throughout the Islamic world. A native of the island of Cyprusand Turkish by descent, the radiant, blue-eyed Moulana (‘wise one’) is a striking figure in mullah’s robes and white turban crowned with the green pointed kulah cap of Naqshbandhi sheikh (literally, ‘old man’).

Almost fifty years ago, he was a biochemistry student living in Istanbul when kismat (destiny) struck and made him to have change of heart. He left everything and set out to find a sheikh or spiritual guide.

In Damascus he met Grand Sheikh Abdullah Daghistani, the thirty-ninth sheikh in the Golden Chain beginning from the Prophet Muhammad. For twenty-two years, Sheikh Nazim performed haj annually. Finally, his Grand Sheikh told him to “Take Islam to Europe.” From England and Germany his following has expanded to Asian countries including, for the last five years, Sri Lanka.

Each year Sheikh Nazim and his mureeds (disciples) go to Kataragama to pray at the mosque and shrine and to look for signs of al-Khidr, the mysterious undying teacher of Islam who, according to local belief, is the presiding spirit of Khidr-gama or Kataragama.

Earlier this month, the Moulana and his mureeds from East and West left Sri Lanka after a hectic fortnight of travel, prayer, and speaking engagements. Before he left, I was privileged to accompany Sheikh Nazim for the final four days of his visit here.

During that time, many like myself heard His Holiness speak in English and Arabic about issues that deeply affect every human being, whether Muslim or otherwise.

With Sheikh Nazim’s kind permission, I record here just a few of his remarkable utterances that spring from a heart immersed in the Holy Quran and the life of the Holy Prophet (Sal). Expressed in simple English, they deliver a message to all that even greater changes may be expected shortly.

“I am not a teacher or lecturer,” he says with typically self-effacing modesty. “I am only a humble servant of Almighty Allah.”

“I am happy that Almighty Allah has willed that I come to Serendib, to your honoured island even though

“I am now in my seventies, and to be with you. You must believe that I am a knowing person. If a person knows, you don’t say that he believes.”

“I am also one of the people who are expecting a saviour and who is looking in the morning and in the evening to hear his news. That is the only news that I am waiting for.”

“Mahdi Alaihi as-Salam and his ninety-nine Caliphs are there (in the Empty Quarter of Arabia). They are waiting and expecting the Holy command of Allah Almighty to appear. And his appearance should be soon, Inshallah.”

Speaking at Cinnamon Gardens after Jummah prayers recently, Sheikh Nazim said he was “very happy to be in Serendib as a pillar of understanding and peace for everyone.” He warned, however, that the spirit of Shaitan was alive and working here in Sri Lanka in recent years and that it was the duty of good people when they saw the mischief-makers to catch them. Justice and faith, he said would give them the strength to do this.

“Therefore the saviours, Mahdi and Jesus Christ must come. And they will destroy the kingdom of devils on earth,”

“There is only one Commander in the entire universe and everyone must follow His Commands. No one can command Him. He commands all. The angels are also absolutely under the Divine Command.”

“Our nafs (ego) forces us to obey it, not to obey Allah Almighty or anyone else. In order to overcome this, we have been ordered to fight the ego. That is the Jihad-ul Akbar, the greatest holy war.”

“The ego always wants to do the opposite of what Allah Almighty orders, just the opposite thing. Therefore there can be no agreement with the nafs because the nafs is against its Creator and against all prophets. Its friendship is with Shaitan only,”

“You Muslims must keep yourself far away from fitna (strife and commotion). You must be obedient to Allah Almighty and to His beloved Prophet. Whoever comes to power in Sri Lanka must take care for you well. Don’t worry, the Prophet’s word is the best and true one, This news I am conveying to you of the coming days for Muslims,”

“This country, this Ceylon-Serendib is a holy country. So many saints always come and go. The spiritual power must be in this land. Serendib is like a busy airport, so many saints are always going and coming. You are lucky people.”

“Allah Almighty turned Adam and Eve out of paradise and sent them to Serendib. He sent His nabis (prophets) to Serendib to guide you. Now soon time is coming for the Beloved One.”

“That day is coming when East and West will recognize that Allah is God without any second, without any partner. One person’s physical body cannot do that, It must be a universal personality. He is the greatest one, coming with a big weapon to take away all the rubbish that is mankind’s lack of respect. It is a divine seal from heaven passing through each and every heart. May Allah forgive us for our bad doings towards His prophets.”

“There are people in this world whose feelings are dead, They are becoming like rocks or robots without any feelings. Dogs are happy and they are glorifying their Lord, You can’t find any creature, not even ants, who are not glorifying God. And you, mankind! You are not glorifying your Lord!”

“Mahdi is the descendant of the Holy Prophet (Sal) in the fortieth generation. The fortieth. Now he is living, but he is not with people, It is impossible for people to look at him because he has such a heavy power,”

Implying that the current Mideast crisis could erupt into the long-expected Armageddon war, Sheikh Nazim urged all mu’minun (believers) to stay calm and be happy, The unbelievers rushing about at that time, he says, will be blown away by the gale of the Sirit that is coming soon.

“Our Holy Prophet (Sal) said, “Oh people, in the days of fitna, if you hear of something happening, stay away from it, And if you are seated, do not get up even to see what is going on there, because he who is seated is in safety. Whoever walks towards fitna to look at what is happening is going to get caught in it. It is dangerous, so please keep away, Oh people.”

But Sheikh Nazim says there is a guarantee for people during the great war of Armageddon:

“There are three points. If they are kept, the person cannot be hurt in the wars. First: it is impossible for those who deny the Creator to survive. Second: cruel people will not survive. Third: envious people, the enemies of mankind, will not survive.”

“The highest degree (of islam, ‘surrender’) is to give up your will to your Lord and to say ‘As You Like!”

Huge events in a short time

“On this radar screen they have just appeared. We are expecting it to come down, but it could be in a few years. The General of Staff of the friends of Allah knows. Because one of them is commanding. He comes from the heavens. And we are now waiting for that which will happen. Huge events will come in a very short period of time.”

“We know that this world is being prepared for huge appearances. In a short while there will be a common change, physically and then spiritually. Time is now over. All nations and all mankind are being prepared for something that is approaching soon. These are huge events, unexpected huge events.”

“If an announcement is made from the East to the West that a ruby the size of a big ball is to be found in the mountains of Sri Lanka, who would trouble to look for it? There is in fact such a ruby to be found and it shall be brought out when Mahdi Alaihi as-Salam comes. So many things will come out, when Mahdi comes.”

A novel aspect of Sheikh Nazim’s prophetic vision is his prediction that all technology, currently in the service of Shaitan, shall turn back upon itself. The very weapons of Shaitan — the Devil’s own tricks — will also be his own undoing.

“It will not be a secret appearance. He (Mahdi) will appear with power, with so much power that everything will be taken away that technology is supporting and people are trusting in. He is coming with miraculous powers and he will open the seed of faith and make it grow up in the hearts of the people.”

“Everything, every bomb is under control. None of them will go off without control. Every warhead on every missile as a jinn (genie). They are all under the command of al-Mahdi.”

“We Muslims do not need to carry pistols or machine guns. There is a need for this for Muslims today because they have no Imam (‘pillar’ or exemplary leader). There should be one Imam for all believers and for the whole Islamic world, not many kings and presidents like today.

“That is the united way that is known through our Shariah (laws) and that is to have one Islamic world and one person to command and the rest must obey. Only this Imam may declare war or fighting.”

“In the last days so many men will be killed that for one man there will be forty women. This is because men are mostly cruel people. So they will die and the women will survive.”

“The Grand sheikh used to say that from every seven six will die and one will remain. When Mahdi comes he will bring so many new people with him who will be coming from around this earth. There are so many unknown worlds around from our world.”

“If you don’t like to live in Sri Lanka and if you are not happy with the laws in Sri Lanka, then leave. It is a big and wide dunya (world).”

“ Anyone who runs away from the Truth (al-Haq) will be punished. They will punish themselves by themselves. Who comes to the truth will be in safety.”

“Who are the true ones? They are the ones who promised to Allah on the Day of Promises, saying “You are our Lord and we are Your servants, only Your servants.”