“Plants are not ‘things’ but ‘energy events’,” Michael Schneider tells us.  “They spiral into existence, resembling whirlpools.”

“The directed, asymmetric, ‘pulsating’ forces manifested in growing living organisms act, or can act, quite differently from the physico-chemical reactions obeying the ‘Principle of Least Action,’ so that the ‘Geometry of Life’ will introduce shapes and volumes not met with in rigorously inorganic systems.”1

“Plants are not objects, and there is no absolute.  They are transient and their form exists within a constant state of flux.  In truth we cannot summarize the design of a plant within a single session of measurement and recording, since even within the space of time between the measuring and the recording enough about the plant may have changed to render the measurement obsolete.”2

In order to understand the geometry upon which plants grow, we must review the Fibonacci sequence and the golden ratio.

Plant growth is governed by the Fibonacci sequence.

The Fibonacci sequence refers to the “law of accumulation”.

It is a self-generating number series that is:

It begins with zero and unity, 0 & 1, nothing and everything, the Unknowable and the manifest:

“The series grows by accruing terms that come from within itself, from its immediate past, taking nothing from outside the sequence for its growth.”3  Much like the ouroboros:

Each number is the sum of the two preceding:

This describes how things grow by building and multiplying what’s already there.

It is reflected in how trees root and branch, how flowers form, how ferns unfurl and pine cones form.  It is ever-present in the plant world.

Five-fold geometry is found in all the flowers of the edible fruit-bearing plants, like the tomato pictured below.

Six-fold plants, like the tulip, lily, and poppy are traditionally poisonous or only medicinal.

Seven-fold plants are traditionally considered poisonous.  These include belladonna and the nightshade family.  Some seed heads of the poppy flower are 7-fold as well.  Many poisonous plants are medicinal in nature, if used properly and not abused.  Once 7-fold medicinal plant is cannabis.

Exotic flowers, such as the orchid (pictured below) and azalea have pentagonal symmetry.

Ten-Fold Plants (ratcheting pentagons) include the passionflower (above), roses and citrus fruits (below).

The Fibonacci sequence is closely associated with the phi ratio – particularly the multiplicative aspect.

Look at each number as a ratio of each successive pair:

Then take the decimal value of that ratio.  As a limit it approaches the golden section but it never gets there.

This is called asymptotically reaching a limit.

These ratios bounce back and forth coming closer and closer to the phi ratio as you move up in the Fibonacci sequence.

This is nature’s way of dealing with infinities in the physical realm.

Bruce Rawles comments, “The sequence is the rational progression towards the irrational number embodied in the quintessential golden ratio.”

You can actually select any 2 numbers, not just 0 & 1, adding each consecutive pair to get the next term and the ideal limit will always approach phi.

The Fibonacci and Lucas series do it the quickest.

The Lucas Series is named after Edouard Lucas (1842-1891) a French mathematician.

Lucas numbers are similar to Fibonacci numbers.  They are:

The Lucas numbers are formed by alternately adding and subtracting the golden powers of phi and its reciprocal 1/phi.

The two irrational parts either zip together or peel apart to form the integers (see chart below.)

These are absolutely exact and not approximations.

The Lucas Series: Even-termed numbers are formed by the addition of the greater and lesser powers of the golden section, odd-termed members by subtraction.  Notice how the decimals in the odd terms are perfectly sliced off.  Credit: Designa: Technical Secrets of the Traditional Visual Arts, page 313

The Lucas series is found in 1.5% of observed phyllotactic plant patterns.

Some of these include: certain cedars, sequoias, balsam trees and other species.

The Lucas number spiral is a logarithmic spiral found in Nature.  It closely approximates the golden ratio when using larger terms.  The smaller terms used the farther it gets from phi.

Below is an image of the familiar golden spiral.

The distance between the golden spiral coils keeps increasing, growing wider as it moves away from the source or narrower as it moves toward it.

It is an exponential, logarithmic spiral.

A logarithmic spiral is on that has the property that the tangent at any given point will make a constant with the radius vector.  Therefore they are equiangular spirals.

These are common throughout the natural world.

“It grows from within itself and increases according to the Fibonacci process of accumulation.”5

The golden spiral can be formed from a golden rectangle.

By removing successive squares from each golden rectangle and filling each square with a quarter arc produces the golden spiral.

The [Fibonacci] spiral is logarithmic and also equiangular, since the angle it describes with the radii remains always the same.

“Segments representing consecutive stages of growth can be rotated around the center until they completely overlap, like a folded fan, proving that old and new stages of growth all share the same angles and the same proportions,” Gyorgy Doczi tells us.

Patterns generated by spirals moving in opposite directions are frequent in nature.  Here they concern us as special instances of a more general pattern-forming process: the union of complementary opposites.  Credit: Gyorgy Doczi – The Power of Limits, 1981

The Golden Spiral also emerges from the Five-pointed Star.

In this construction the basic figures of geometry expressing the number 5 are all displayed in one scheme.

Phi goes to infinity and Fibonacci has a finite center.

Fibonacci is the physical manifestation of phi found in nature.

It is the finite reflection of the infinite principle embedded within it.

When comparing a Fibonacci and Golden Mean spiral they are off the closer you get to the center, but by the time you get to steps 55 and 89 in the Fibonacci spiral the two spirals are practically identical.

“The difference is in the areas where they originate.”6

The Golden Angle is the phi proportion of a full circle (360º).

The Golden Angle is thus:

This golden angle is seen in the phyllotaxis of plants.

In geometric analysis of plants, insects and animals another form of the ideal angle is often used.

“It is this property of producing, by simple additions, a succession of numbers in geometrical progression, or of similar shapes which explains the important role played by the Golden Section and the Phi series in the morphology of life and growth, especially in the human body and in botany.”7

Phyllotaxis is the arrangement of leaves on a plant stem.

The term comes from the Greek phullon – ‘leaf’ and taxis – ‘arrangement’.

The model was first proposed by Wilhelm Hofmeister in 1868.

Phyllotactic spirals form a distinctive class of patterns in nature.

Various Phyllotaxis Patterns including the Lucas (#2) and Fibonacci (#3) Spirals

In essence leaves form a helix pattern centered around the stem – either clockwise or counterclockwise.

Credit: Michael Schneider – A Beginner’s Guide to Constructing the Universe

This leads to maximal efficiency in plant life forms.

Branching can be a beautiful geometric study.  The spiraling effect helps the plant as a whole.

“All deductions concerning phyllotaxis can be based on a single hypothesis, as ‘the distribution of energy follows definite paths which may be studied by means of geometric construction’…in effect the precise phenomena developed in the growing apex of a plant are too obscure to be followed out to their conclusion in our present state of knowledge; we know, however, the spiral principle to be a geometric one.  Still it tells nothing of causes, but can only express facts.”8

Counting the number of parallel spirals in each direction will yield consecutive numbers along the Fibonacci series.

The ratio of clockwise to counterclockwise spirals is an approximation of phi – the golden ratio.

“Modern botanical thought on this subject is that the cone simply accumulates bracts, mechanically emerging wherever they fit.  But deeper insight will show that the bracts are precipitating upon the invisible lines of force where opposite spirals cross.  We are seeing the manifestation of the rhythm of an energy field.”9

Why Do Plants Use the Fibonacci Sequence for Growth and Structure?

Parastiches are the invisible spiral lines of the pattern of the areoles on some plants, such as cacti and pine cones

Each bract of a pine cone lies where two spirals (parastichies) cross.

Phyllotaxis describes the way trees (or stems) span out with branches (or leaves).

Leaves spiral around stems like a spiral staircase – in either clockwise or counterclockwise, at different slopes.

“If a helix is drawn passing through each leaf base until it reaches the first base which is vertically above the starting point, and P is the number of turns of the helix and Q is the number of leaf bases passed, the P/Q is a fraction which is characteristic of the plant’s leaf-distribution pattern.”10

The numerator and denominator tend to be Fibonacci numbers.

All members of this series of fractions lie between ½ and 1/3.

Successive leaves are separated by at least 1/3 of the stem circumference.

Since three golden arcs add up to slightly more than enough to wrap a circle, this guarantees that no two leaves ever follow the same radial line from center to edge.

Each vein feeds a chain of leaves along a particular pattern.

As your eye walks up and around the spiral staircase of leaves you will discover that the number of leaves in one leaf cycle is a Fibonacci number.

The number of spirals you turn to get to the next leaf cycle will also be a Fibonacci number.

Also seen in sneezewort (pictured below)  and brown algae

All of the 350,000 known plant species can be characterized by the ratio of leaves-to-spirals in one leaf cycle.

The higher the numbers are on the Fibonacci sequence and the more precise the ratio is to phi, the more complex the plant.

If you multiply the inverse of this ratio by 360, you get the angle between the measurement of consecutive leaves as they emerge from the stalk that is characteristic of the species.

We can see “the trinity of polyhedra, or approximately the hexagon, the pentagon, and the square, and all of these details are of importance, as they reveal how Nature carries her geometric arrangements down to the smallest details.”11

As we saw above, the ideal angle is the Golden Angle.

It was discovered in 1837 by the Bravais brothers who discovered the crystal lattice and ideal divergence angle of phyllotaxis.

As the seed head expands, new primordia are formed at angles of 137.5°.

A primordia is a leaf or flower in its earliest recognizable stage.

The more precise the phi ratio is, the less overlap of leaves so each leaf gets the most sunlight and the least shade.

Below shows how only the precise angle of 137.5° (center, below) produces a perfect packing:

When we see plant growth as a spiral, beneath that lies ratcheting geometry.  A spiral comes from geometry that is being continually ratcheted inwards or outwards at a specific angle. 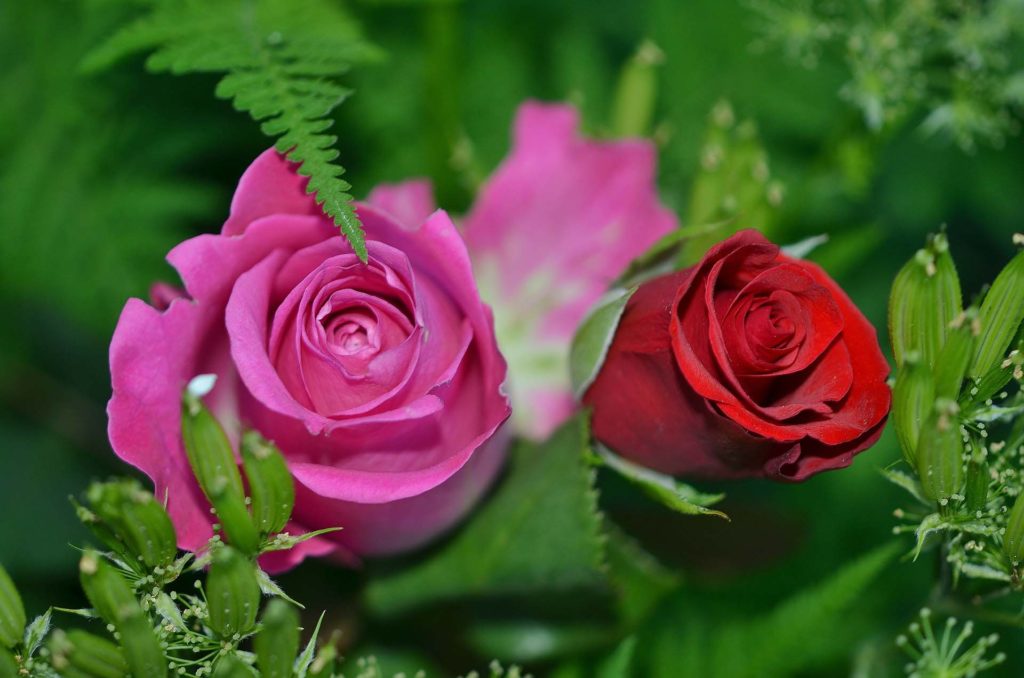 Remember, All is Motion.  Plants are not static things.  This includes the atomic, molecular and cellular constituents of plants, and the physical material aspect of plants as a whole.  Plants represent vortex motion, albeit on a very slow scale – so slow most of the time we don’t notice it.  However, just one look at a time lapse of a plant over an hour, a day, a week, or longer, will show us just how much plants move and respond to their environment in innumerable ways.

Socrates tells us that ‘Geometry is the art of the ever true.’

“The constant reminder that flowers are emissaries of the ‘ever-true’ makes what we live in a cosmos and not a chaos.”12

In the next article we will look at the geometry of the plant growth cycle as well as concepts from Goethe’s The Metamorphosis of Plants.