The parrot  Seeker of eternal life:

What good is immortality Spent in a cage?”

The “Conference of the Birds” is a 12th-century Sufi poem by Attar of Nishapur, that is a timeless parabol of the mystical quest for the Truth. It features the hoopoe, a spiritual guide figure, leading the birds on a perilous search for their King, the mythical Simorgh. Each bird in turn makes an excuse for not setting out, until at last they are all ready to take part. The parrot symbolizes false immortality, and would rather stay safe in her cage than  live forever. Read here the Conference of the Birds

From the “Conference of the Birds” by Attar of Nishapur

“Welcome, O Parrot ! In your beautiful robe and collar of fire, this collar is fitting for a dweller in the underworld but your robe is worthy of Heaven. Can Abraham save himself from the fire of Nimrod? Break the head of Nimrod and become the friend of Abraham, who was the friend of God. When you have been delivered from the hands of Nimrod put on your robe of glory  and fear not the collar of fire. 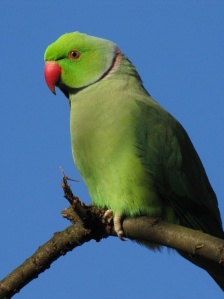 Then came the Parrot with sugar in her beak, dressed in a garment of green, and round her neck a collar of gold.

The hawk is but a gnat beside her brilliance; earth’s green carpet is the reflection of her feathers, and her words are distilled sugar.

Listen to her: ‘Vile men whose hearts are iron have shut me in a cage, so charming am I. Held fast in this prison I long for the source of the water of immortality guarded by Khidr. Like him I am clothed in green, for I am a Khidr among birds.

I should like to go to the source of this water,

but a moth has not strength to lift itself to the Simurgh’s great wing ; the spring of Khidr is enough for me.’

The Hoopoe replied: ‘O you who have no idea of felicity !

He who is not willing to renounce his life is no man. Life has been given to you so that for an instant you may have a worthy friend. Set out upon the Way, for you are not an almond you are only the shell. Join the company of worthy men and enter freely in their Way.’

The parrot stepped forward and said, “I am the Khidr (a) of all the birds and desire the water of immortality.

The Hoopoe replied, “Foolish parrot, you wear the robe of green but you are not worthy of the robe of Khidr (a).  You will not achieve your true quest by seeking the water of life but by following with us on the way to the Pool of Paradise, the true source of all waters and all life.

“Come dear Parrot come and see if you can follow us beyond the junction of the Sea of Mercy and the Sea of Wrath, beyond the sinking boat of this life, the crumbled wall of our civilization, and beyond the sacrifice we all must make when we submit our Will to the Will of our creator and murder our own ego.  Come with us Parrot and see if you can even reach as high as our master Musa (a) before ever claiming to be like the unknowable yet all knowing Khidr (a). This life is a snare that all birds must escape to reach our real life.  Bid farewell to this false life dear Parrot and follow us to the ends of this earth.”

The parrot lowered his head to the ground, submitted and followed the Hoopoe on the journey.

‘ We have seven valleys to cross and

only after we have crossed them shall we discover the

Simurgh. No one has ever come back into the world who

has made this journey, and it is impossible to say how many

parasangs there are in front of us. Be patient, O fearful one,

since all those who went by this road were in your state.

‘The first valley is the Valley of the Quest, the second

the fourth is the Valley of Independence and Detachment,

the fifth of Pure Unity, the sixth is the Valley of Astonishment,

and the seventh is the Valley of Poverty and Nothingness

beyond which one can go no farther.

‘ When you enter the first valley, the Valley of the Quest,

a hundred difficulties will assail you; you will undergo a

hundred trials. There, the parrot of heaven is no more than

a fly. You will have to spend several years there, you will

have to make great efforts, and to change your state. You

regard as nothing all that you possess. When you are sure

that you possess nothing, you will still have to detach yourself

from all that exists. Your heart will then be saved from

perdition and you will see the pure light of Divine Majesty

and your real wishes will be multiplied to infinity. One who

himself up completely to the quest symbolized by this valley.

He will ask of his cup-bearer a draught of wine, and when he

has drunk it nothing else will matter except the pursuit of

his true aim. Then he will no longer fear the dragons, the

guardians of the door, which seek to devour him. When the

door is opened and he enters, then dogma, belief and

THE FOOL OF GOD AND KHIZR

There was a man, mad from love of God. Khidr said to

him: ‘O perfect man, will you be my friend?’ He replied:

‘You and I are not compatible, for you have drunk long

draughts of the water of immortality so that you will always

exist, and I wish to give up my life. I am without friends and

do not know even how to support myself. Whilst you are

busy preserving your life, I sacrifice mine every day. It is

better that I leave you, as birds escape the snare, so, 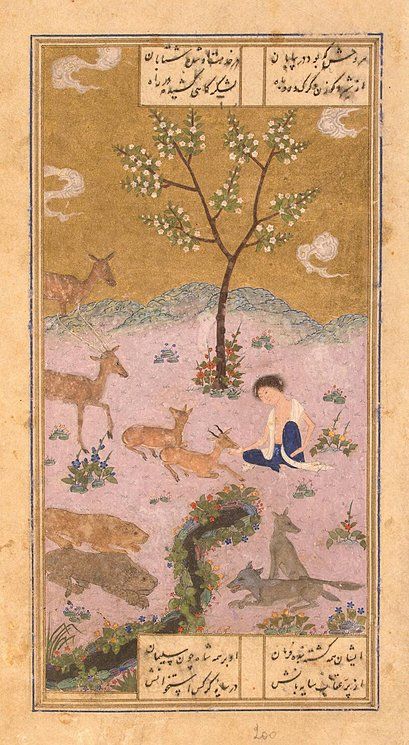 Farid ud-Din ‘Attar’s Conference of the Birds is an allegorical poem elaborating on the nature of mystical experience and the stages on a wayfarer’s path to the Divine. Using an overarching story of the hoopoe bird of Solomon who convinces a host of other birds to undertake a spiritual journey, ‘Attar maps out the human weaknesses that must be overcome before such a quest, as well as the arduous obstacles one will need to overcome to reach the goal. At each step of the journey, ‘Attar uses countless smaller tales within the frame story to underscore the point being made; cautionary tales warn of the dangers of worldly attachment, while stories of lovers and their beloveds illustrate the relationship that should exist between seeker and God. The poem gives a detailed presentation of a number of elements of the Sufi experience. The seven valleys of spiritual stages, or maqamat, in ‘Attar’s poem, skillfully describe the stages in Sufi doctrine of the tariqa, or pathway to God, while the hoopoe’s role as guide for the birds and the relationship between Shaykh Sam’an and his disciples elaborate on the nature of master-disciple relationships. Read More

Farid al-Din ‘Attar (d. 1221) was the principal Muslim religious poet of the second half of the twelfth century. Best known for his masterpiece “Mantiq al-tayr”, or “The Conference of Birds”, his verse is still considered to be the finest example of Sufi love poetry in the Persian language after that of Rumi. Distinguished by their provocative and radical theology of love, many lines of ‘Attar’s epics and lyrics are cited independently of their poems as maxims in their own right. These pithy, paradoxical statements are still known by heart and sung by minstrels throughout Iran, Afghanistan, Tajikistan, and wherever Persian is spoken or understood, such as in the lands of the Indo-Pakistani Subcontinent. Designed to take its place alongside “The Ocean of the Soul”, the classic study of ‘Attar by Hellmut Ritter, this volume offers the most comprehensive survey of ‘Attar’s literary works to date, and situates his poetry and prose within the wider context of the Persian Sufi tradition.
The essays in the volume are grouped in three sections, and feature contributions by sixteen scholars from North America, Europe and Iran, which illustrate, from a variety of critical prespectives, the full range of ‘Attar’s monumental achievement. They show how and why ‘Attar’s poetical work, as well as his mystical doctrines, came to wield such tremendous and formative influence over the whole of Persian Sufism. Read here 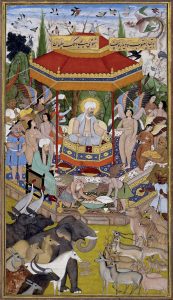 This volume presents the lives and sayings of some of the most renowned figures in the Islamic Sufi tradition, translated into a contemporary American English from the Persian of the poet Farid ad-Din Attar. This resource is useful for studies of mystical traditions. Read here 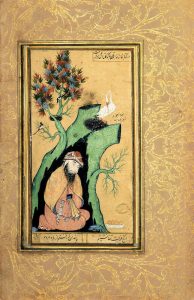 The Ilahi-Nama (Persian: الهی نامه‎) by Attar Farid Al-Din, is another famous poetic work of Attar consisting of 6500 verses. In terms of form and content, it has some similarities with Bird Parliament. Read here