Proclaiming St George’Day ( 23rd of April): A Day of “uprightness”, and a day of remembering, sharing and of coming together, organizing “Convivium” or Forum for Ethics, Honesty and “Uprightness”
Asking St George his Intercession, protection and patronage for the project: 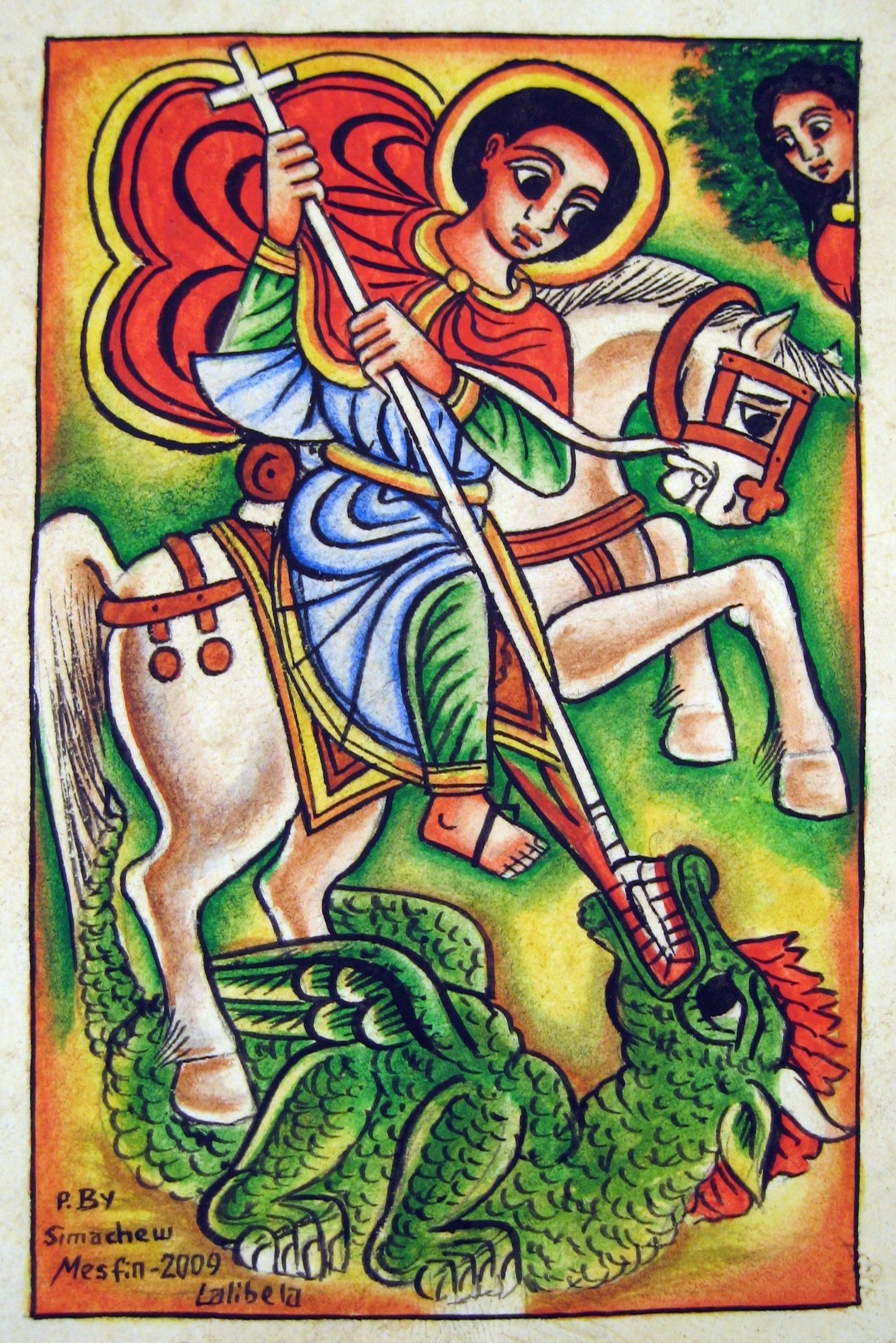 One year later on 23 April 2021, no celebrations outside due to lokckdown but we can still pray in our Heart and Remember Him

The Prayer to Saint George directly refers to the courage it took for the saint to confess his Belief before opposing authority:

Prayers of Intercession to Saint George:

Faithful servant of God and invincible martyr, Saint George; favored by God with the gift of faith, and inflamed with an ardent love of Christ, thou didst fight valiantly against the dragon of pride, falsehood, and deceit.

Neither pain nor torture, sword nor death could part thee from the love of Christ. I fervently implore thee for the sake of this love to help me by thy intercession to overcome the temptations that surround me, and to bear bravely the trials that oppress me, so that I may patiently carry the cross which is placed upon me; and let neither distress nor difficulties separate me from the love of Our Lord Jesus Christ. Valiant champion of the Faith, assist me in the combat against evil, that I may win the crown promised to them that persevere unto the end. 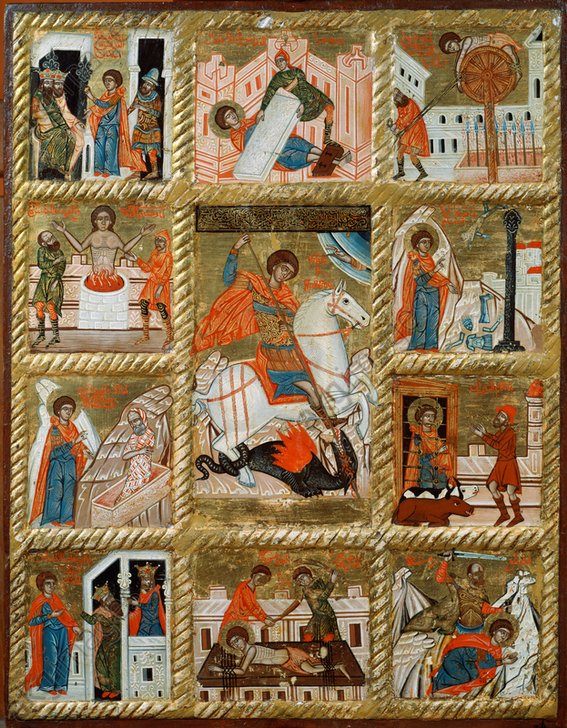 The Passion of St george:

The legend of St George is extant in the medieval manuscripts in a variety of forms, as with most major saints’ “lives”. This is a translation into English of the oldest form of the St George legend, most likely 5th century in date, and condemned as foolish and heretical by the church in the 6 th century Decretum Gelasianum. In his study of the various forms of the text, Matzke chose to give this original form the slightly confusing label of “the apocryphal text”. A later revised form, purged of the worst excesses of the original, he called “the canonical text”.
The Greek text of this original form is mostly lost, but a palimpsest in Vienna contains some 5th
century leaves.

April 23 – The passion of the Martyr George

St. George replied to him, “I am a servant of God. The name which I have from men is George and in Christ I am a Christian, a Cappadocian. I was over a large number of soldiers, and well have I laboured in the service of Christ. I was also in the province of Palestine. Tell me, O emperor, to which of the gods do you advise me to sacrifice?”
The emperor said, “To Apollo, who oversees the sky, or at least to Neptune, whom we say
established the earth.” St. George replied, “I do not worship those of whom you speak, the old serpent. But to the people who are ever awaiting the mercy of God I speak, in the names of saints. I send away many and a few by name, so that I may describe the works of your gods.
Which of these do you make me similar to: Eve, or Jezebel, the murderess of the prophets? or instead Mary, who gave birth to the Lord? Be ashamed, O emperor. Those in whom you believe are not gods, but idols, deaf and blind, the works of the hands of men. 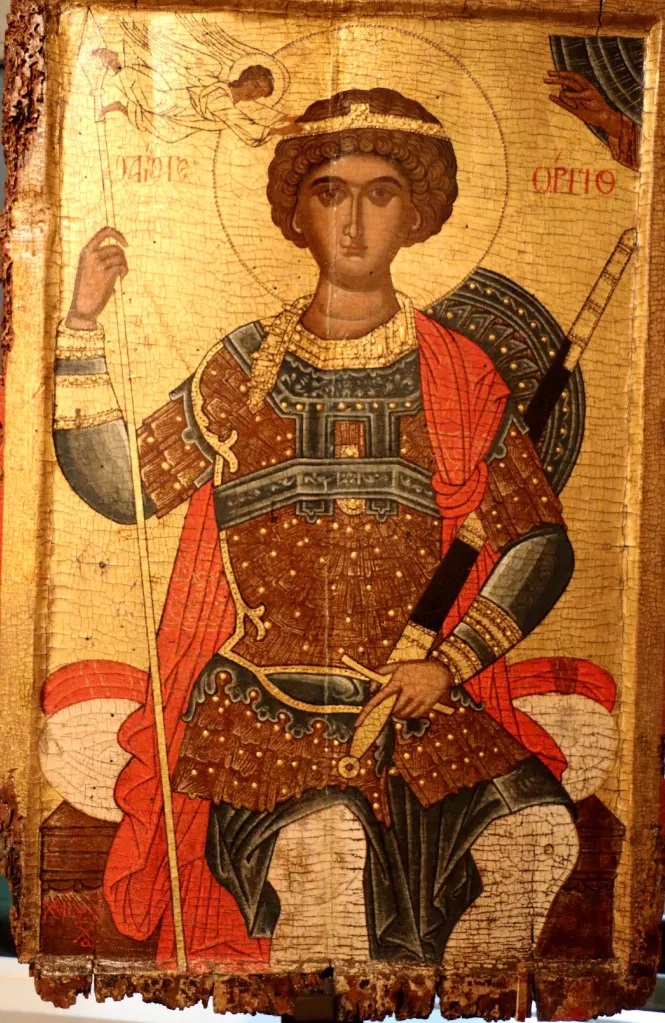 Celebrating all over the World see here

Saint George (Greek: Γεώργιος, Geṓrgios; Latin: Georgius; d. 23 April 303 was a Roman soldier of Greek origin and a member of the Praetorian Guard for Roman emperor Diocletian, who was sentenced to death for refusing to recant his Christian faith. He became one of the most venerated saints and megalo-martyrs in Christianity, and was especially venerated by the Crusaders. Orthodhttps://maypoleofwisdom.com/saint-georges-day/ox Christians commemorate his feast day on April 23rd.

Saint George’s Day, also known as the Feast of Saint George, is the feast day of Saint George as celebrated by various Christian Churches and by the several nations, kingdoms, countries, and cities of which Saint George is the patron saint including England, and regions of Portugal and Spain (Catalonia and Aragon).

Saint George’s Day is normally celebrated on 23 April. However, Church of England rules denote that no saints’ day should be celebrated between Palm Sunday and the Sunday after Easter Day so if 23 April falls in that period the celebrations are transferred to after it. 23 April is the traditionally accepted date of the saint’s death in the Diocletianic Persecution of AD 303.[1]
The fame of St. George increased throughout Europe in 1265 by publication of the Legenda Aurea (The Golden Legend) by James of Voragine, a collection of stories which included that of George and the Dragon. Actual origin of the legend of George and the Dragon is unknown. It may have been begun by the Crusaders when they returned home but was not recorded until the sixth century. St. George was a prominent figure in the secular miracle plays performed in the springs of medieval times. Some hold the story to be a christianized version of the Greek legend of Perseus said to have rescued a princess near the Lydda where St. George’s tomb is located.
A poll published last week by the IPPR, a Left-leaning think tank, suggests that seven out of 10 people living in England want Saint George’s Day to be a public holiday. Well, on Ethiopia’s Saint George’s Day they surely have a public holiday, as it falls on the same day as Labor Day.