May 5 and 6 is known as Hıdırellez, a festival that marks the start of spring and summer in parts of the Middle East and in particular among Turkish-speaking communities.

The night of May 5 and day of May 6 are known as Hıdırellez or Hızırellez, a festival that marks the start of spring and summer in parts of the Middle East and in particular among Turkish-speaking communities. (One has to wonder at the number of festivals that mark the coming of spring.) The word Hıdırellez is supposed to have come from a combination of Hızır (Khidr) and İlyas (Elijah). 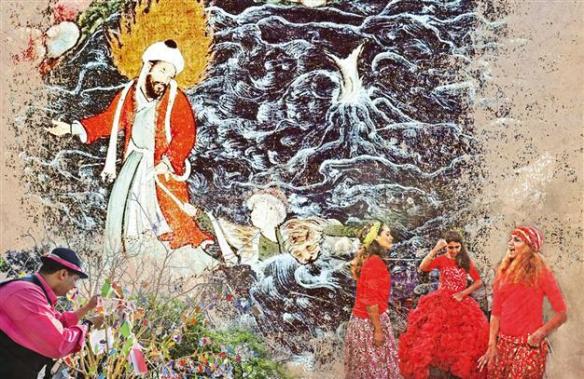 Who were these two men and how are they connected?

Hızır (which means Green Man in Arabic) has been tied to early Middle Eastern legends of spring, the renewal of warm weather among the Mesopotamians and the Egyptians, the reflowering of plants and the growth of new crops. Similar beliefs and celebrations were to be found among the various peoples of Anatolia and Central Asia. But the origin of Khidr or Hızır is obscure. His name is not mentioned in the Bible or in the Quran. There’s no real explanation as to why this person is called the Green Man (Khidr) although some say it was because the Prophet Muhammad wore a green cloak while others attribute it to his role in the greening of the earth in spring time.

One of the Islamic traditions, however, says that the Prophet Moses went to Ethiopia to acquire knowledge and, while there, he met a man named Khadir (Hızır). In the story, the two men have a fish which they intend to eat; however, they forget it and it gets away. (This is why Hızır is portrayed with a fish.) It’s possible that this was Hızır. The latter is supposed to have then tested Moses by insisting that he not ask the reason why he performed three acts. But Moses was unable to understand the meaning of the actions and impatiently asked why each time, at which point the man refused to teach Moses because of his impatience (Quran, 18: 60-82).

Elijah, on the other hand, is known from Judaism and Christianity and is apparently a real person who lived in the northern part of the kingdom of Israel in the ninth century BC. He was considered one of the great prophets in Judaism who prophesied that great troubles would come on anyone who tried to turn the Jews away from God to worshipping idols and false gods such as Baal. He is credited with raising the dead and uttering prophecies that came true. He is also supposed to have been taken to heaven in a fiery chariot. Most importantly in Judaism, Christianity and Islam, it is prophesied that he will return to earth before the Day of Judgment.

In the Quran (Chapters 37 and 6), Elijah is called Elias and he is mentioned several times in which he tries to persuade the people of Israel to continue to worship God, rather than false idols. He is also one of the prophets praised by God for being righteous.

Hızır and Elijah have been described as “the two ‘guardian spirits’ of this world and the next.” Hızır is supposed to have drunk the water of life and achieved immortality. This made him one of the four immortals that included Idris, Jesus and Elijah. As an immortal, Hızır is believed to be able to grant people their wishes, distribute wealth and good fortune and restore health. For example, he is credited with giving the gift of poetry to the 14th-century Persian poet Hafiz and, according to tradition, Hızır not only served as the guide of Moses, but also of Alexander the Great.

According to a tradition (hadith) that is attributed to the Prophet Muhammad, Hızır and Elijah meet every year in Jerusalem, some say during the month of Ramadan and that they then perform the pilgrimage together. There they drink enough water from the well of Zamzam to tide them over for another year. They are also supposed to meet at Arafat, which is one of the places that are part of the rituals associated with the pilgrimage.

But the connection between Hızır and Elijah is that the two meet each other on May 5 on earth every year in the Gregorian calendar. From May 6 until Nov. 4, the days are known as the days of Hızır or summer. There were, for centuries, only two seasons, summer and winter.

Hızır is sometimes identified with St. George, whose feast day is May 6 in the Greek Orthodox Church; this year, Greek Easter falls on this weekend. He has also been taken up by some of the Sufi mystical sects as part of their beliefs, in particular the Naqshbandi sect. For them, he is the eternal prophet who wanders the earth helping people and doing good deeds.

The feast of Hızır is celebrated in Turkey primarily among the Alevis, and some of the traditions associated with it are the same as those practiced during the celebrations for the New Year (Nevruz) in March. Jumping over an open fire after making a wish is thought to make the wish come true. Another tradition is leaving your pantry door or your purse open so that during the year food or money should come in abundance. People put on feasts for their neighbors with music and dancing for entertainment. Another tradition is to make a small model of what you wish for – a house or a boat for instance – and place it overnight under a rose tree. Hızır is supposed to make your wish come true but, if he doesn’t, then you try again the following year.

Of course, there’s the familiar one of writing down your wish and hanging it on a tree, preferably one near a stream or pond since Hızır is associated with the water of life. That’s somewhat similar to the Tibetan practice of hanging up prayer flags and the idea of having one’s wishes come true.

If you’re in Istanbul, you may want to join in the Hıdırellez festivities being held in Ahırkapı Park that start on May 4 and continue until May 9. The community of Ahırkapı has been hosting this celebration for a number of years now and includes fire jumping, food, dancing and music. Event organizers suggest taking public transport as the events attract large crowds.