Prophet Elijah (Al-Khidr) Rescuing Nur ad-Dahr from the Sea, a scene from the Hamzanama, here imagined in a Persian miniature by Mir Sayyid Ali (c. 1550 C.E.)

In ancient Islamic legend, there exists the wonderful, contrary figure of Al-Khiḍr, an immortal prophet who kills a youth out of mercy and who scuttles a boat of some travelers to deny the greed of a king. He is described as God’s special servant, a protector, trickster, saint, and mystic, who has been identified with various ancient deities.

The roots of Khiḍr, also known as Khadir, go back to the earliest Muslim text, the Quran, in which he accompanies Moses as a servant of God. But because he is immortal, Khiḍr is said to have appeared to other Muslims through the centuries.

Some scholars maintain that the character of Khiḍr is much older than Islam itself and that his roots lie in Utnapishtim of ancient Mesopotamia, or in the Canannanite god Kothar-wa-Khasis, or even the Zoroastrian water goddess Anahita.

Khiḍr has been identified, some say falsely, with the Christians’ St. George and with Elijah of the Bible. He has been equated with Europe’s Green Man and with Native American tricksters. 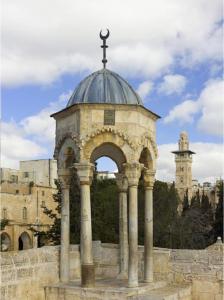 The Dome of al-Khadr (also spelled Khidr), in Arabic the Qubbat al-Khadr, on the Temple Mount in the Old City of Jerusalem

Khiḍr does strange things that seem wrong but which are steeped in wisdom and benevolence. In the Quran, the figure of Moses’ traveling companion of Chapter 18 has been identified as Khiḍr, though he is not named as such. The two go on a journey, and Khiḍr warns Moses not to question him about what he does. Moses does question him all along, only to regret it in the end.

Khiḍr kills a youth, tears open a boat at sea with people aboard and rebuilds a wall that’s about to collapse even though the villagers had denied him and Moses food.

Khiḍr finally consents to explain himself to Moses, from Sura 18: [Al-Khidh r] said:

“This is parting between me and you. I will inform you of the interpretation of that about which you could not have patience.

As for the ship, it belonged to poor people working at sea. So I intended to cause defect in it as there was after them a king who seized every [good] ship by force.

And as for the boy, his parents were believers, and we feared that he would overburden them by transgression and disbelief. So we intended that their Lord should substitute for them one better than him in purity and nearer to mercy.

And as for the wall, it belonged to two orphan boys in the city, and there was beneath it a treasure for them, and their father had been righteous. So your Lord intended that they reach maturity and extract their treasure, as a mercy from your Lord. AndI did it not of my own accord. That is the interpretation of that about which you could not have patience.”

Jews tell these same stories but attribute them to Elijah. 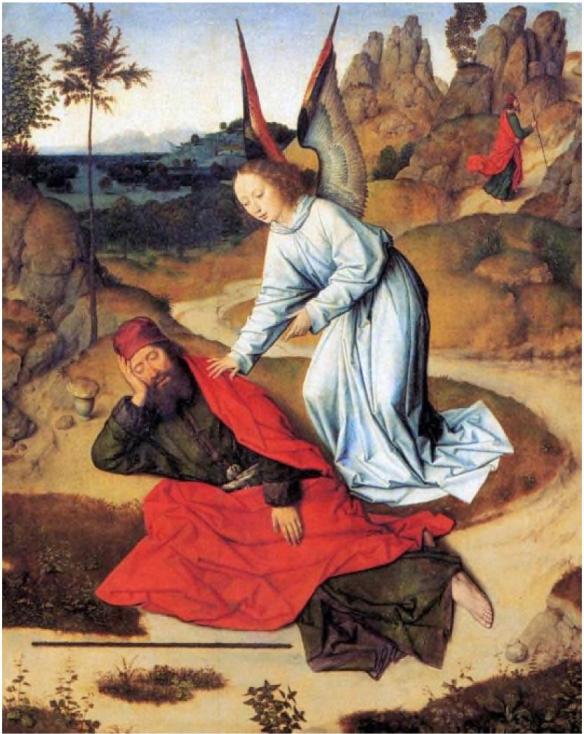 The Prophet Eli/ah in the Desert, a 15 th century painting by Dieric Bouts; sometimes Khiḍr is equated with Eli/ah and the same stories are even told about them. The two are among the four immortals of Islam; the other two are Jesus and Idris.

Khidr and the Sufi Dervish

In a legend about Khiḍr, a Sufi dervish entices a king to support him for three years, after which, he tells the king, he will produce the Green Man ( Khiḍr resembles the word “green” in Arabic, though others give other etymologies for the name). At the end of three years, the dervish of course cannot present Khiḍr to the king, who is eager to meet him, so the dervish flees. But the dervish meets a man all in white who takes him back to the king. The king commands his ministers to pronounce judgment on the sneaky thief.

One minister tells the king to cut the dervish into pieces. Another counsels him to boil him alive, another to throw him in the furnace. The fourth counsels the king to pardon him.

The man in white ( a child) agrees with all, saying each thus indicates his origin, respectively, son of a butcher, of a cook, of a baker and of nobility. The king pardons the dervish, not only because that is the noble thing to do, but because the boy in white brought before him by the beggar is El Khiḍr. Read here the Story by hajja Amina

The Foundation of Immortal Youth

Khiḍr, according to legend, is the only person to have tasted the liquor of the Fountain of Immortal Youth in the East. He was wandering in a desert and came to a dried-up spring. He dipped a dried fish in it, and the spring came alive again. Khiḍr “realized that he had found the fountain of life. He dived in and became immortal and his cloak turned green. He is often associated with the primordial ocean and is said to live on an island in the middle of the sea,” says The Penguin Dictionary of Symbols.

A painting from Western Asia in which al-Khiḍr is conveyed over the River of Life by a fish. (Image from Khidr.org)

Patron of the Sea

Among the Arabs of Syria even today he is a sea spirit and the patron saint of the sea. There he is called “He who walks in the seas.” Muslims revere him as a saint and launch tiny boats with lights as an offering to him to rid themselves of sins or evils that menace them.

The Penguin Dictionary of Symbols explains about Khiḍr further:

“… he is of necessity ruler over plants as well as over streams. Some Arab writers say that he “is seated upon a white fur which turns green” and a commentator adds that this fur “is the Earth.” The Sufis say that he also aids mankind against “drowning and fire, kings and evil jinn, serpents and scorpions.” He is thus clearly a mediator, reconciler of opposites who settles fundamental divisions to make safe the road along which mankind travels. In Islam green is still the color of knowledge, like that of the Prophet. The saints in Paradise wear green.”

The legends say Khiḍr dwells on the edge of the world, where the celestial and earthly oceans join. He is a mystical figure of plant life and the sea and is patron saint of travelers. Some say he was a son of Adam and that he retrieved his father’s body after the Biblical flood. Still others say he was born of the Earth, in a cave, and was fostered by wild animals. He grew up and became the servant of a king, the legends say, identifying that king as Allah or his Spirit.