Thousands of bystanders stand with necks craned, cheering on Saint George as he goes into battle with the ferocious dragon in a small circle in the middle of Mons’ Grand-Place. The curious scene is a highlight of the Belgian city’s Doudou festival, an ancient feast of lush parades, fights with wicker monsters, and buckets of crowd participation.

Up in the forested Belgian Ardennes, slightly bizarre folkloric celebrations have long been a part of the annual diet – just think of Binche’s carnival with its white-masked, orange-pelting figures, or Andenne with its bear-filled streets. Local identity and pride in one’s cultural heritage play a major part in these festivities, and they are, in fact, the reason they still exist today, and this is no less true in Mons’ case. The 800-year-old Ducasse de Mons on Trinity Sunday, lovingly dubbed ‘le Doudou’ by locals, is perhaps the most raucous of them all. As Saint George on horseback and a giant wicker dragon make their way to the middle of the main square for their epic brawl, members of the crowd jump forward to try and grab a handful of straw from the mythical beast’s tail. A handful of its hairs, legend has it, will bring brave audience members luck.

Before the meticulously choreographed “Battle of the Lumeçon” begins, however, visitors are reminded that the dragon isn’t the only adversity Mons has had to reckon with in its history. Indeed, true fans have started the day’s celebrations off much earlier in the Sainte-Waudru Collegiate Church. Here, the shrine of Sainte Waudru, foundress of the city and miracle worker, is taken out in the morning to meet a temple overflowing with worshippers. Believed to have saved Mons from a sweeping plague in the 14th century, the holy woman’s relics are loaded onto an elaborately decorated wagon called the Car d’Or (“the Golden Cart”).

A whole parade of local organizations dressed up in medieval garb join the procession, and when the draft horses pulling the ornate wagon invariably struggle on one particularly steep alley, the watchful masses never fail to reunite forces and help them up the slope. Locals especially have a stake in this: superstition has it that if the cart doesn’t get up in one try, bad things await the city. Meanwhile, the daredevils who plan on doing some tail-grabbing later have had the opportunity to gain a little liquid courage at the food and drink stalls lining the parade’s route. With each victory – getting the cart up the hill, the slaughter of the wicker dragon – the audience yells out joyously: “Et les Montois ne périront pas!” (“And the people of Mons will not perish!”).

Life: Married to the Count of Hainault, she raised four children. After her husband retired to an abbey, she herself became a nun in 656. She founded her own convent (Sainte-Waudru) and the city of Mons grew around it. Her biography celebrates her for “the pious intention under vow to free captives. She arranged the ransom price [pretium], weighed out the silver. … When the captives had been bought back with the ransom money out of her own purse, at her command  they returned to their families and homes.”

The shrine of Saint Waltrude is kept in the Saint Waltrude Collegiate Church in Mons. Each year, as part of the Ducasse de Mons festival, the shrine is placed on the car d’or, a gilded cart, and drawn by horses through the city streets.

“Both her parents (Walbert and Bertille) and her sister (Aldegund) were canonized. Her four children were also declared saints (Landericus, Dentelin, Aldetrude, and Madelberte) and so was her husband (Madelgaire).”

The people of Mons celebrate the city’s founding matriarch, St Waudru, the patron saint of the city who lived in the seventh century. The Doudou festival dates back to 1348-49 when the city was in anguish due to the outbreak of a plague.

On the church’s initiative, a procession was organized and the shrine of St Waudru carried through the streets of the city. Miraculously, the plague was overcome. Since then the procession takes place every year, parading the relics of St Waudru, which are held in two separate caskets, as a gesture of gratitude and as a blessing upon the city.

The remains of St Waudru were identified in 1803and in 1997, DNA analysis confirmed that the remains do indeed belong to a woman who lived in the 7th century. The festival has been recognised by UNESCO as a Masterpiece of Oral and Intangible Heritage of Humanity. It was an important proclamation by UNESCO and which raises awareness among the local community of the importance of protecting their cultural heritage and maintaining their traditional expressions.

On Saturday evening, locals and officials gathered in the Collegiate Church of St Waudru. Children in yellow uniforms entered followed by nuns in white rather than black habits. Other groups of children, men and women dressed in different traditional church garb marched through the halls, passing both the seated and standing participants and taking their positions in front of the church. The ceremony continued after the mayor of Mons, read his speech in front of church leaders. The ceremony came to an end when the shrine of St Waudru was brought down from its resting place above a high platform, and delivered to the mayor of Mons in trust. The crowd in the church chanted and welcomed the moment when the reliquary was placed in the middle of the church for people to pay their respects, seeking health and prosperity. As I mentioned earlier, there are two golden caskets: one holding the head and another containing bones. I was told that it was an old tradition to keep the body and the head separately in case one is lost. The groups in religious outfits marched again, bowing in front of shrines to pay their respects before leaving the church.

On Sunday morning the procession, one of the most significant events in Wallonia and in the whole of Belgium, set off from Sainte-Waudru Collegiate Church and marched through streets of Mons entering the Grand-Place (the central square of Mons) and passing in front of the city hall. More than a thousand local volunteers dressed in traditional medieval costumes arrived in an orderly manner, representing various guilds, societies and religious bodies. There were 71 groups from Mons fellowships and parishes, 160 policemen, 180 musician, 50 horse riders and 100 choristers accompanying the groups along the procession. Some of them carried a flag related to their group or religious statues.

as the “battle” approaches people gather

At the end of the procession, the Car d’Or carrying the two caskets along with the priest and choristers (a heavy wagon decorated in gold and bronze built in 1781) was pulled by six horses to the front of the town hall. The priest read his testimony and reminded the crowd of the story of the plague. Then, the Car d’Or returned to the church signaling the end of the ceremony. But the wagon had to climb a steep stone-paved street, the Rampe Sainte-Waudru. In order to get up this street, people gathered behind it to push it to the top. Some local people believe that if it does not reach the top in one go then the city will have to face adversity. When the crowd had accomplished their mission, they shouted, ‘Et les Montois ne périront pas!’ (‘And the people of Mons shall never perish!’)

The Doudou festival, which is a combination of religious and modern traditions, continued in the main square in front of the Hotel De Ville with a re-enactment of a battle called the Lumecon. It symbolises the famous battle between St George and the Dragon.

St George was seated on a horseback, protected by the 12 Chin-Chins, men dressed in horse-skirts. The eleven men in white controlled an odd-looking green dragon whilst its long tail was carried by eight, green leaf-men. St George circled in a clockwise motion on the ground and the dragon moved in the opposite direction, followed by policemen, firemen and devils. The Chi-Chins fight a tough battle with the devils who were equipped with balloons made of cow bladders to protect St George. St George attacked the dragon and tried to kill it with a sword. The scene looked like a chaotic battle of good versus evil, but all has been planned and rehearsed by Mons’ volunteers.

Sometimes the dragon moved towards the large crowd which had gathered around the battlefield. The people tried to pull horsehair from the dragon’s tail which provides a symbol of good luck. As the passion and excitement increased young men climbed over each other to reach the tail. I witnessed several men who fell to the ground.

Finally, St George killed the dragon with a gun which seems totally incongruous given the mediaeval nature of the ceremony because attempts to kill the dragon with his sword failed

The celebration continued in the main streets and square until late. Restaurants, cafes, and food stalls remained full of people in festival mood throughout the city. The music continued to play and entertain the crowds till the revelry ended and they returned home. 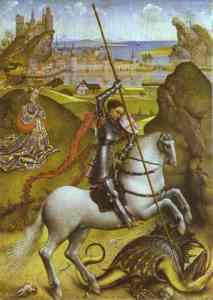 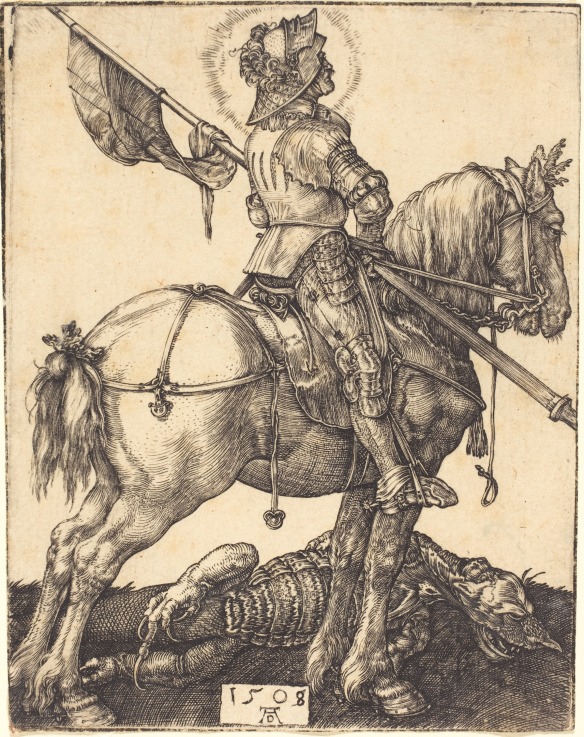 see also St. George and the Miracle of Mons – Belgium